Just 144 kms from Kalol is the census town Adalaj well known for the tourist destination Adalaj Step Well! Adalaj is located in Gandhinagar district of Gujarat state. It takes about 2 1/2 hours to travel to Adalaj from Kalol by road if you take the Ahmedabad - Zalod route.

Two places you must see in Adalaj are Adalaj Step well (Vav) and Trimurti. Let us know more about these fascinating structures. 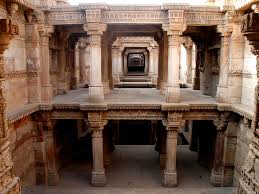 Adalaj Step well is a popular tourist attraction in Adalaj and is situated 18 kms from Gandhinagar. It was built in 1499 A.D. by Queen Rudabai, wife of the Vaghela chief, Veersinh. Step well is also called 'vav' in Gujarati language. This step well is carved beautifully and intricately and goes down very deep!

There are lovely designs on the walls and pillars which include designs of flowers, leaves, fish, birds etc. There are beautiful ornamental designs too. Step well at Adalaj has three gates for entering and five storeys. On both sides of the steps are finely carved balconies too! Carved elephants mark the levels of the various storeys in the step well.


Significance of Step Well at Adalaj

In olden days, travellers and caravans used to stop by near the step well for resting and quenching their thirst. This was also a place for spiritual refuge. It served as a cultural place also. Villagers used to arrive at the step well early in the morning, offer prayers to deities carved on the walls, interact with each other and even rest under the cool shade of the step well. They filled water from the 'vav' and then departed for their homes. 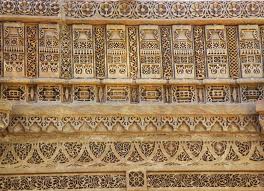 Light and air enter the well through an opening in the ceiling. People believe that the temperature inside the well is 6 degrees cooler than outside temperature as sunlight does not enter inside except for a brief period during noon time. The well is octagonal in shape.

There are many step wells in Gujarat but this is the only step well with 3 entrances. All three entrance stairs meet at the first storey. The step well depicts Indo-Islamic architecture and design. Islamic floral patterns fuse into Hindu and Jain symbols effortlessly. On the walls are depictions of women churning buttermilk, dancers accompanied by musicians, women adorning themselves and a king sitting on a stool, (a pot that contains the water of life) and the Kalp Vriksha (a tree of life) carved out of a single slab of stone. Carvings of nine planets (nav graha) towards the edge of the step well is believed to protect the monuments from evil spirits. 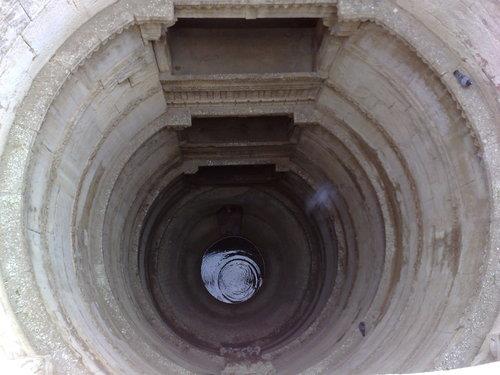 How to Reach Adalaj Step Well

Ahmedabad is connected quite well with neighbouring cities and towns. There are bus stands in Gitamandir near Kalupur Railway Station and Paldi. Gujarat state transport buses and private operators ply buses for all destinations in Gujarat which has a developed road network.

The step well was dug directly into the water table, exposing fresh water that rose and fell according the seasons. However, the step well is now dry.


Trimandir - Another Attraction Near Adalaj

On the Ahmedabad-Kalol Highway, there is a Trimandir which is a two storey structure. The building has a temple on the first floor and big hall on the ground floor.

The Centre Sanctum of the Trimandir comprises of a 13 feet idol of Lord Simandhar Swami along with other idols of shaashan dev Shree Chandrayan Yaksh dev and shaashan devi Shree Panchanguli Yakshini devi. There are more idols of many Tirthankars. The left sanctum has a Shivling and idols of Hanuman, Parvati devi and Ganpati. The right sanctum houses idols of Shree Yogeshwar Krishna Bhagwan, Tirupati Balaji Shree Shreenathji, Shree Bhadrakali Mataji and Shree Amba Mataji. 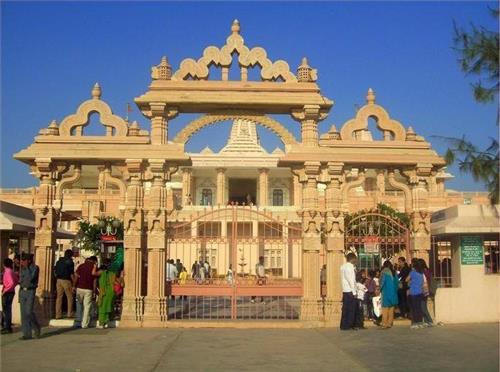 On the two extreme ends of the temple are idols of Shree Padmanabh Swami Prabhu and Shree Sai Baba. There is also a museum and mini-theatre in the Tri Mandir. The mini theatre gives you glimpses of the spiritual life of Param Pujya DadaShree (Sri Pratik Pahwa).

Tri Mandir has not only been built in Adalaj only but also in Rajkot,Bhuj, Chalamli, Bhadran, Vasna  and Godhra.

Your trip to Adalaj will be more than a holiday. It will be a different experience --- you will know about life and culture of people today as well as that of yesteryears by visiting the ancient Adalaj step well!