Festivals like Diwali, Janmashtmi, Kite festival, Ganesh Chaturthi, Navratri, Holi are celebrated in Gujarat with great fervour. While the sky is flooded with kites on the occasion of the Kite festival (Uttarayan), Navaratri is celebrated with garba. However, Modhera Dance Festival is a dance festival which brings to life the beauty of contemporary dances performed with ancient architectural beauty of Sun Temple in the background! 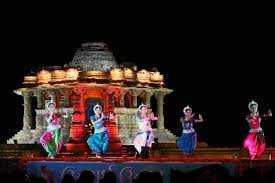 This festival is also known ‘Uttararadh Mahotsav’. Modhera Dance Festival is celebrated in Modhera (in Mehsana district), about 70 kms. from Kalol in Gujarat. The dance festival is organized in the Sun Temple in Modhera in the third week of January every year. This festival is celebrated after Uttarayan festival and the celebrations stretch over three days! The ambience of the beautiful Sun Temple in the background and talented and popular dancers on stage is indeed mesmerising. The Tourism Corporation of Gujarat Limited (TCGL) organizes this festival.
The architecture of Sun Temple describes the Golden era of the rule of Solanki empire when it was built. They built the temple in honour of their ancestral God. The Sun temple is a 11th century temple located on the banks of Pushpavati river. It was constructed sometime between 1026-27 A.D., during the reign of King Rushabh Bhimdev I of the Solanki dynasty.This was the time when Somnath and the adjoining area was plundered by Mahmud Ghazni. The Sun temple too was brought to ruins by Mahmud of Gazni.

For those who love to witness architectural excellence, you must see the depiction of life of people during those times as well as incidents of Ramayan and Mahabharata portrayed beautifully on stone pillars and walls of the temple.

Colourful lights fall on intricate carvings of the Sun Temple (dedicated to Lord Surya) and makes the atmosphere magical. Art forms like dance and music come out alive during this festival, also known as Uttarardh Mahotsavor Modhera Utsavis. 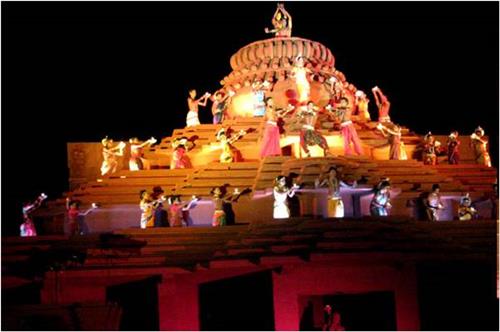 There is also a museum, amusement park, cafeteria, picture gallery and library inside the Sun Temple premises. Just near to the Sun temple is a huge Sun Kund or Rama Kund which is surrounded by step-terraces along with many, many small temples. These small temples may number to around 108. Nowadays, prayers are not offered in this temple. The temple is under the supervision of Archaeological Survey of India.

The Modhera Dance festival is organized in order to keep the culture and traditions of India alive. The garba performance is also one of the highlights of the festival. It shows the cultural richness of Gujarat state. Tourists enjoy the festival and get to see not only traditional and ancient dance forms but contemporary dance as well!


How to Reach Modhera near Kalol

The nearest airport is Ahmedabad. Mehasana is the nearest Railway station. Traveling from Ahmedabad to Modhera takes around 3 1/2 hours by bus.

Explore more about Entertainment in Kalol