Kalol is situated in the district Gandhinagar of the state Gujarat. The city has been planned to be developed as an Industrial city. Ahmedabad, the biggest city in Gujarat is very close to Kalol. Hence Kalol is being also developed as one of the major suburbs of Ahmedabad. With all industries and residences brought up in the city, it quite unlikely to have natural reserves inside the city.

Nonetheless, at about 20 kilometers from the city a shallow pond has been officially declared Bird Sanctuary. This place is known as Thol Lake Bird Sanctuary since 1988. It is one of the places where tourists can get a glimpse of clean and green nature away from the hustle-bustle of the city. 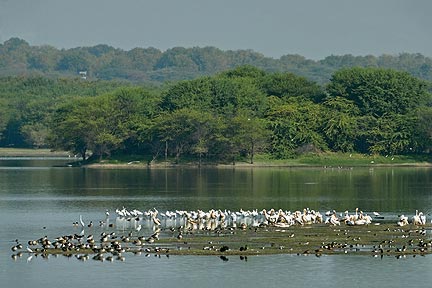 Thol Lake is stretched nearly about 7 sq kilometers. The lake itself does not make the whole sanctuary. The freshwater lake is surrounded by marshes and forest on its edges. The lake has been declared a sanctuary since many birds extort their food from the lake and also from the nearby agricultural land. Fishes in the lake are the food for long necked cranes. It is a beautiful scene to watch cranes fishing in the lake. 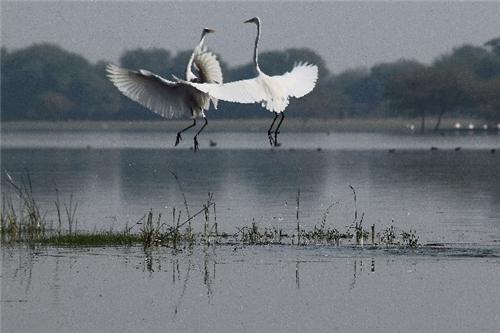 Many colored birds are also seen flocking here. Botanists and zoologists have ample scope to study marshes and insects in this sanctuary. Herons, spoonbills and different types of ducks are mostly seen in this lake. It is said that more than 100 species of birds visit Thol Lake every year. There are some which migrate during summers while others stay in this habitat.

The beauty of this bird sanctuary is enclosed in the various colors that the birds disseminate and within the ambience which is created out of their chirping. Thol Lake is also a popular spot for bird watchers, especially during the winter season. In Monsoons birds are seen to perch rather than having a dip in the lake. Post monsoon season is the best time to visit this place. November to February is ideally suggested because many migratory birds also flock here along with the rest of the species.

An entire day can be spent here during winters. It is a good weekend getaway from the city of Kalol. Furthermore lush green nature provides ample scope for those who are interested in photography. Capturing different birds in their lenses can be more than just interesting. The natural ambience also provides relaxation opportunity.

Explore more about Geography of Kalol